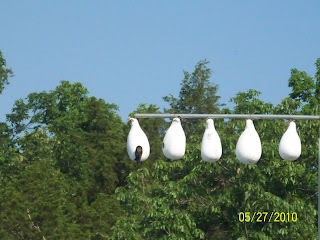 I am not a true member of the PMA,although I do check out and use what I can of their information.If I were a real Purple Martin enthusiast, I would join the association, but I can't deal with all of the paperwork involved. I don't know if it's mandatory or not, but the paperwork involved, looks unreal. It seems you need to document every move the Martins make through out the entire season, and I'm sure that's the best way, when it comes to knowing all you need to know about your birds,but I retired from my real job of 30 years, mainly because the extent of the paperwork there, had become ridiculous(I didn't take book keeping in school and had no intentions of doing any).I love to see and know all I can about these birds, but I am beginning to think I get too involved.Not only with the birds, but with every living thing that crosses my path.For now, it is the Martins.If I had been as involved as a real enthusiast, I would have had a better idea and plan for the problem that came up yesterday. A really bad storm was brewing. A cold front moving in against the 100 plus degrees we were having, so I knew it would be  bad.I was rushing to check things over before it hit,when I saw a full grown baby Martin, on the ground. That was not good. We have 2 cats.Martins  hardly every light on the ground.I picked the baby bird up and took it inside the garage where Pop was watching Westerns so we could form a plan of action. I  have read that you can pick them up and put them back in the nest,but which nest? I didn't have mine numbered, and I sure didn't know how many babies were in each nest,or which set of parents it belonged to. What was I to do? I had Pop to raise me up in Ole Rose's  front loader and I tried to poke the baby back in one of the gourds,but he resisted going in that one.It was much too high and too dangerous for me to do much maneuvering up there in that front loader and I was a bit frightened of being up that high anyway,so I put him in an empty gourd hoping the real parents would find and continue feeding him,but no,he was not having any part of that gourd either.Out he came. We took him back to ground level, and had decided to call it quits with trying to help. I felt he might be old enough to try to fly, so I tried putting him up on a guide wire ,but he didn't like that either. I tried lightly pitching him up to the roost pole,only to have him fly to the front porch of the house. Thank goodness, I had locked the cats inside for now.I gathered the bird up once more, and thought I'd try one more time to see if he could fly any at all. I pitched him up, and partly with the help of the wind that had come up, he flew off into the woods. I only hope he survived the bad rain,lightening, and wind storm we had a few minutes later. It was pretty rough here,for about an hour or so.Lightening was really bad. We thought we had lost one of the TV's and the computer, but after working with them for awhile,they were both OK.Not so sure about the little bird though.But I tried.
Posted by Sue from Ky. at 6:18 AM 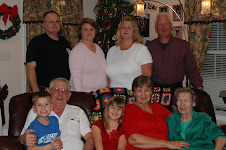 The Gang's All Here!